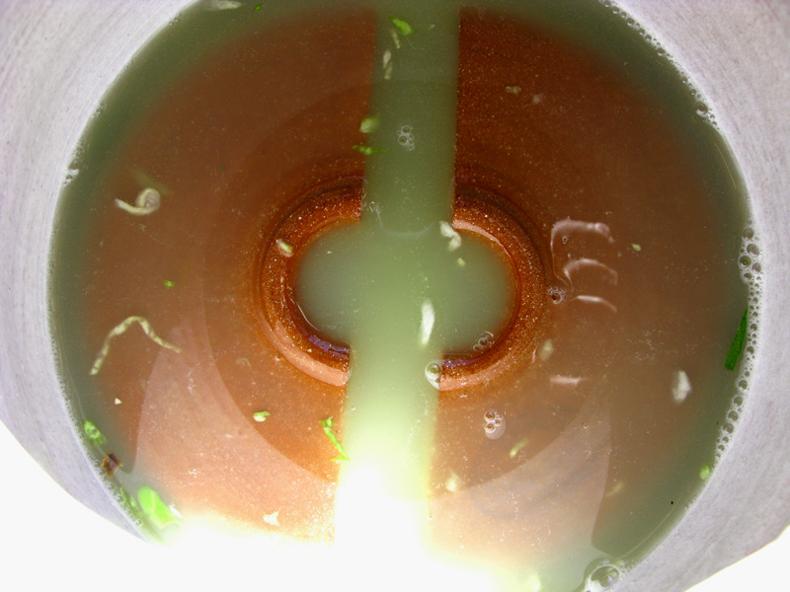 Vegetable fermentation is easy! The fate of all organisms disconnected from the life-source is decay; it can be no other way. Lactobacillic fermentation of vegetable substrates is a human directed process that may be viewed as 'controlled spoilage', where our control achieves beneficial change (preservation and augmentation) rather than food spoilage. We direct this process with the addition of salt, which creates an environment that favours probiotic organisms while preventing colonisation by pathogenic organisms. Many vegetable ferments require no added brine – rather the vegetables are salted and massaged, pounded, or compacted until the salt draws moisture from the vegetables. With care, this brine rises to cover the vegetable matter. It is crucial that the vegetables are covered with brine to reduce oxidation and mould formation on matter exposed to the air. On occasion, not enough moisture is held within the substrate to produce sufficient brine, so we then make up brine to top up the fermenting vessel. Depending on taste and experience with different vegetable ferments, this brine will be between 1 – 3 tsp of salt per cup of water (1 tsp/cup is good for sauerkraut). The addition of salt makes vegetable fermentation not only easy, but safe. Vegetables float, and there are strategies we may employ to keep them submerged. All these strategies involve weighing down the vegetables with some food and fermentation safe item. Glass, ceramic, hardwood, and stone are the most common, but stones must be smooth, non-porous, and well scrubbed and boiled. Items I use include: glass platters, lids, paperweights, jars, egg cups, shot glasses, ramekins, jugs and bowls; and good quality unchipped ceramic plates, saucers, and bowls (no external paint or metallic leaf). What I use depends on the fermenting vessel I am using, and I have found the perfect weight that fits each vessel snugly either in our cupboard, or from op shops (also called thrift shops, or charity shops, depending where you live).

Water moat crocks are available widely and consist of a glazed ceramic crock with a deep, enlarged lip within which the lid sits. The lip, or moat, is then filled with water, which prevents the entry of oxygen while allowing pressurised CO2 to escape. In effect, the water moat is a simple airlock. These crocks are always supplied with weights – two half circular ceramic sections, sometimes glazed, that when lain carefully over the cabbage form a circle that snugly fits the diameter of the crock. As long as the crock is well set up, the only thing we need be concerned about is loss of the water in the moat which may occur in two ways. The first mystery of the disappearing water is one we can all guess with ease – evaporation. The second mystery is a little more tricky, and while the effect is the same, it gives us clues as to when it might occur, and how to prevent it. Gasses expand when heated, and contract when cool, and since our crock with moat maintains a facsimile of a one-way vacuum within it, if the crock cools substantially, the contracting force of the gasses can draw water out of the moat, and into the crock (though this is very rare, and only typically occurs in arid type locations which have extreme temperature differentials betwixt night and day). This most often retains a seal if the lid is a good fit to the moat via a thin film of water that adheres between the two, and we look out for this in the morning if the overnight temperature has been markedly cooler than the daytime temperature. Whenever we see an empty moat, we half fill it just to be safe. Usually water is held in suspension under the lid, and comes back into the moat with pressure normalisation – in that case, we spoon the excess out (or have the crock placed so overflow is not an issue). Many crocks have the inner lip of the moat higher than the outer lip to guard against this eventuality, but since water can in theory be drawn into the crock from the moat, we fill it always with brine at roughly 2% or 1 teaspoon of salt (roughly 5 g) per cup (250 ml) of water. Strategies for reducing water loss are the laying of a damp cloth over the lid and moat for loss via evaporation, and maintaining a more constant temperature with a heating pad or insulating jacket for loss via pressure change.

An airlock jar is simply a glass jar with a screw top lid that has a small airlock in it. The airlock is either an exaggerated sideways ‘S’ shape or a small cylinder nested within a larger one topped by a 'bell', both with chambers for water that again prevent oxygen entering, but allow CO2 to escape. These may be purchased (e.g. Ball or Weck both do airlock jars), or a home version will suffice at a fraction of the cost. Simply find a suitable size repurposed jar with a metal lid, and purchase an airlock and bung from a home brew supplier. Drill a hole the diameter of the midpoint of the bung, sand and clean the hole so it is neat, then push in the bung and airlock. Be very careful doing this, especially if you are drilling a hole in a Ball jar lid - the lid can and will be caught by the drill and rotate at speed, and a Ball lid will cut you badly if you get in the way of it. Use a teatowel and pliers to hold any lid you want to drill, blood does not mix well with vegetable fermentation. Now that you are all safe, I'll continue. The airlock is held upright, and filled with water to the level of the line marked on the side. You will see bubbles coming out of the airlock as fermentation commences, and an indication that fermentation has neared completion is a slowing or apparent lack of activity in the airlock. A rolled cabbage leaf cap (plug) and some kind of weight are still necessary.

Rubber sealed jars come in several types; the kinds I use are Italian-made Fido jars with a rubber seal and a metal bail arm type clip, and Australian-made Fowlers Vacola preserving jars. Most Fido jars will off-gas under sufficient pressure, but a caution here – some jars, particularly with brand new seals, or seals of a cheap and ungiving plastic and/or silicon may not off gas. Excess CO2 can lead to explosions, the way to check for off-gassing is to put a little sideways pressure on the lid of a ferment that has been set a few days without removing the bail arm clip – if you hear a little hiss, the seal is loose enough for our needs. Fowlers jars are straight sided and come in various sizes. They are very good quality glass, with a recessed groove which holds a rubber O-ring. A stainless steel lid covers the jar and comes down over the O-ring, and is held in place with a metal clamp. The ring is designed to create a vacuum when canning produce, after which the clip can be removed for storage in the pantry. For fermentation use the clip is left in place, and the ring effectively excludes oxygen while allowing off-gassing. The Fowlers No. 31 jar (with a 4 inch diameter and comfortable 750 ml capacity plus headspace) is the size I use for small batch ferments. I use the cabbage leaf plug, and a stack of glass Mason jar lid inserts as the weight. Glass paperweights or candle holders can be used in the same way. I stack them until they are just proud of the rim of the jar then clamp the lid on, which pushes them down on the cabbage. I have never had kahm yeast, mould, or oxidised vegetable matter using this system, and I have never had a jar explode. Fowlers jars are only available in Australia.

If fermenting in a Mason jar, or a repurposed jar, we will need to release pressure during the early stages of fermentation. The best way to do this is to open the lid carefully until we hear a hiss of escaping gas, then immediately closing the lid to prevent any air getting in. A plug and food-safe weight are still required for these ferments.

Open crock ferments, that is a crock without a moat but still with a lid, is fine for short ferments, but over the course of a six week sauerkraut ferment, the likelihood of mould developing is high. Diverse moulds produce such a variable and potentially debilitating or fatal array of mycotoxins I long ago abandoned making sauerkraut in open crocks, and recommend the same to anyone who seeks my opinion on the matter. The likelihood of a seriously toxic mould forming on your sauerkraut ferment is minimal, so to save or toss a mouldy ferment is something for each of us to decide for ourselves. Read more about mould here.